There are few cinematic terms I despise as much as the phrase “Manic Pixie Dream Girl” (MPDG for short).  My problems with this term are legion, so first off let’s have a little history.  Nathan Rabin coined the term when describing Kirsten Dunst’s character ‘Claire’ in the Cameron Crowe film Elizabethtown.  According to Rabin, Dunst epitomizes the MPDG, a female character who “exists solely in the fevered imaginations of sensitive writer-directors to teach broodingly soulful young men to embrace life and its infinite mysteries and adventures.”  These women are describes as bubbly, childlike muses who exist solely to inspire a male protagonist, encouraging him to embrace and enjoy life. 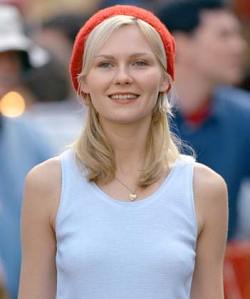 The MPDG is one of those cinematic terms that was assimilated as soon as it was uttered; a lot of people accepted its existence as fact immediately, as if Rabin’s term was absolute and not to be questioned.  No one seems to care if it’s a particularly useful or accurate term.  The AV Club (which originally featured Rabin’s Elizabethtown review) later published a list of “16 Films Featuring Manic Pixie Dream Girls.”

The problem is that I don’t think the MPDG even exists.  The AV Club and other websites have spent a lot of energy chasing rainbows, trying to chronicle a supposed Grand History of MPDGs in Cinema, supposedly proving this trope exists by shoehorning some of film history’s most notable female characters—from Diane Keaton’s eponymous Annie Hall and Kate Winslet’s Clementine (Eternal Sunshine of the Spotless Mind) to Katharine Hepburn’s Susan (Bringing Up Baby)–into this category.  I can’t possibly think what Claire in Elizabethtown has in common with Annie Hall, except perhaps that they’ve both fallen for neurotic men.  Indeed, if these women represent the MPDG, perhaps we could just as easily dub Orlando Bloom’s’Drew Baylor’ and Woody Allen’s ‘Alvy Singer’ the archetypal Neurotic Suicidal Boyfriends.  Or would that be reductive?

Yes, there are characters like Claire in Elizabethtown, who are childlike and irreverent.  However, not all of the characters considered MPDGs are as one-dimensional as Rabin would have you believe.  The MPDG is not an archetype, but is instead a failure by screenwriters to create multidimensional and realistic female characters.  She represents a lack of interest by screenwriters and directors to develop nuanced and complicated depictions of women on screen, when cardboard cutout women who merely stand, look pretty, and say compelling things would do just fine.  Because, lest we forget it, this is not our story: it’s the male protagonist’s story.  Elizabethtown, for example, is the story of how a suicidal man’s life is saved, not how one girl actively choses to do the saving.

The inclusion of so many complicated, strong female characters on these lists illustrate just

how arbitrary and useless the definition of the MPDG really is, and how people eager to verify this term via example are actually misreading and/or oversimplifying complex female characters.  Many MPDG lists wrongly include Clementine from Eternal Sunshine, and Summer from 500 Days of Summer.  Clementine, for example, is explicitly not a MPDG: her character actually turns to the male protagonist of the film and says “Too many guys think I’m a concept, or I complete them, or I’m gonna make them alive. But I’m just a fucked-up girl who’s lookin’ for my own peace of mind; don’t assign me yours.”  She explicitly tells Joel (and the viewer) that she is just a girl—she is no MPDG–and yet here we are literally assigning to that character the very thing she makes a point of rejecting.

It’s the same problem with 500 Days of Summer—people imagine that Summer is some quirky girl meant to cheer up and reinvigorate the depressed male protagonist, Joseph Gordon-Levitt’s ‘Tom’.  In reality, the crux of the film is that Tom not only has to take control of his own life, but that he wrongly imagines Summer is his own personal MPDG.  In fact, director Marc Webb was asked specifically whether Summer was an MPDG and denied it, noting: “That is one of the codes of the movie. He falls in love not with her but the idea of her.”

It’s not bad enough that Hollywood chooses to make men the protagonists of most movies.  No, we as viewers have to oversimplify and quantify some of our most well-drawn, unique, and complicated portrayals of women on screen.  Labelling Annie Hall, Clementine, and other female characters as MPDGs serves as a means of dismissing them.  They are written off as manic (emotional) pixie (troublesome) dream (imaginary) girls (not women). In other words, the application of the term MPDG to a breadth of female characters serves as a means of highlighting the many one-note representations of women on screen, while simultaneously reducing any richer female characters to supposed one-dimensionality.  MPDG is a term used to turn women into girls, characters into quirks.  Ultimately, just as Tom did to Summer, American pop culture writers, theorists, and film viewers alike have fallen in love with the idea of the MPDG, when in reality she doesn’t exist.